← Back to Press Room

A clear vision for the future has long been a hallmark of the Greater Orlando Aviation Authority (GOAA) and it’s stewardship of Orlando International Airport (MCO). Today, the airport and community celebrated the most recent manifestation of that vision, the historic opening of Terminal C. The dedication ceremony, which included state and local officials, airport partners and community leaders, was the culmination of a decades-long journey of planning, conceptualizing, and more importantly perseverance, to reach completion. This new reality in connecting next-level air travel with multi-modal transportation access will raise the bar for world-class customer convenience.

“Responding to passenger demand and supporting the dynamic growth in Central Florida have always been key elements to our phased development philosophy,” said Greater Orlando Aviation Authority Chairman Carson Good. “This terminal reflects the growth of our global appeal as an international travel gateway for business and leisure.”

“Today’s travelers to and from Central Florida demand efficient connections to other modes of transportation, so it is essential that we stay at the forefront of innovation, customer care and improved connectivity,” says Greater Orlando Aviation Authority Chief Executive Officer Kevin Thibault. “Our challenge will always be to provide state-of-the-art services and facilities at an affordable cost.”

While the Terminal C story may have reached its climax in 2022, it’s really been a chronicle of development dating back to the 1990s. Not long after the new Orlando International Airport opened in 1981, GOAA already began looking farther into the future. With foresight that the region had the potential to become one of the world’s hottest destinations, continued development to support expected passenger traffic growth was envisioned.

Construction of Terminal C is in line with the Aviation Authority’s history of planned, phased and fiscally-responsible development based on demand and the airport’s Master Plan. In keeping with that spirit of foresight, the GOAA Board approved a $4.2 billion Capital Improvement Plan (CIP) that included renovation and expansion projects that began in 2015. In its full context, the development of the South Terminal Complex included the South Airport Automated People Mover Complex (Terminal Link), Intermodal Terminal Facility (now known as the Train Station) and enhancements to the North Terminal Complex.

Terminal C is the unifying feature of the South Terminal Complex, which will become one of the nation’s first multi-modal transport hubs with direct access to Brightline higher-speed, intercity rail; planned expansion of SunRail commuter rail; a proposed light rail system; multiple ground transportation options; and an Automated People Mover connection between the South and North campuses.

Terminal C is a critical element of airport development and the region’s economic growth. By enabling MCO to accommodate an additional 10-12 million annual passengers, the new facility will increase overall airport capacity to nearly 60 million passengers a year. 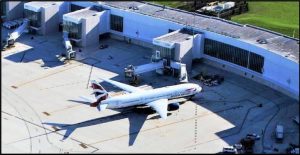 Dedicated totes with Radio Frequency Identification chips are paired with individual bags to provide real-time tracking information along the entire route. In addition to streamlining the delivery process, the tote system reduces bottlenecks and nearly eliminates jams. It also offers ease of future expansion and lower life-cycle cost. In addition the system incorporates a robotic early storage facility with an 1,800-bag capacity. 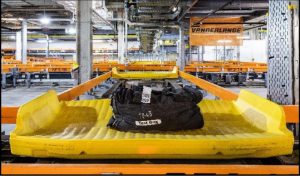 Arrivals and bag claim are located on the top level so passengers will experience the beauty of Central Florida immediately after deplaning. Skylights that run the entire length of the concourse, along with floor-to-ceiling windows, bring the region’s natural wonders into view for all arriving guests to enjoy. Departures, ticketing and security are located on the second level and ground transportation on the first level. 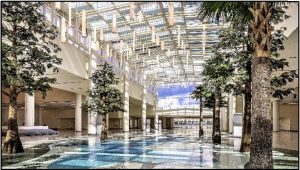 With an eclectic mix of national and local brands, Terminal C features 24 food & beverage outlets, 11 retail stores and one lounge for a total of more than 80,000 square feet of concession space. To maximize customer options once they make their way to the gate area, 93% of the concessions are located post-security. 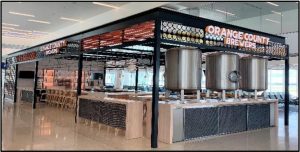 Large-scale immersive and interactive multimedia features are architecturally integrated and feature original content displayed in ultrahigh resolution. The cinematic storytelling celebrates distinctly Central Florida experiences, such as a rocket launch from Cape Canaveral, cattle herding on the Deseret Ranch and swimming with manatees in Crystal River. The displays are featured in the gate area hub and airside North Concourse, with the third feature in the public entrance area planned for the future 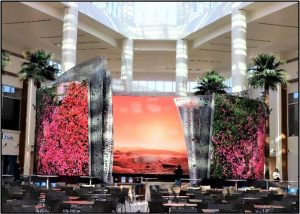 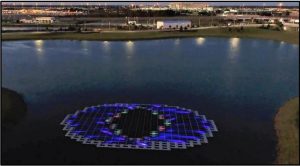 Terminal C design evokes a campus vision by focusing on a unifying theme. The design includes a concept called “The Boulevard,” which creates a gateway to Orlando and captures the essence of Central Florida. The facility is designed to be intuitive so the passenger is drawn from one element to the next by creating an exciting and memorable travel experience. As one of the busiest airports in the world, Orlando International is the premier global gateway to the most-visited destination in the nation. Terminal C enables MCO to continue serving the needs of the diverse Central Florida community and meeting the demands of projected passenger growth.

From design to completion, Terminal C has been a story of collective energy directed toward transforming the customer experience. Orlando International Airport has always taken great pride in being recognized as an industry leader and a passenger favorite. Terminal C reinforces both those reputations. By devoting the appropriate resources to development, MCO will optimize its ability to set the standard for travel excellence by delivering The Orlando Experience®.

When you click on the Pay Now button below, you will leave the website of the Greater Orlando Aviation Authority (the “Authority”) and will be redirected to the Online Payment Portal – PayPoint (“PayPoint”), which is operated and maintained by First Data Merchant Services (“First Data”). The Authority has no control over PayPoint and does not assume any responsibility, endorse or guarantee any aspect of your use of PayPoint.

Please note that the Authority’s Finance Department makes every effort to produce and publish the most current and accurate information possible. However, payments received via PayPoint are not processed until the next or following business day and will not be reflected until that time.

When you click on the CONTINUE button below you will leave the website of the Greater Orlando Aviation Authority (the “Authority”) and will be redirected to Viewpost.  The Authority has no control over Viewpost and does not assume any responsibility, endorse or guarantee any aspect of your use of Viewpost.