← Back to Press Room

ORLANDO, FL. — Operational activity at Orlando Executive Airport (ORL) showed consistency and improvement over the course of the 2020 calendar year. According to official and unofficial statistics, ORL had one of its busiest years in the past five years.

“The Aviation Authority recognizes that general aviation plays a significant role in the vitality of the Central Florida economy,” said Carson Good, Chairman of the Greater Orlando Aviation Authority. “The impressive activity statistics at Orlando Executive Airport highlight the efforts of staff and partners to maintain the highest level of performance throughout a difficult year.”

Because of COVID-19 safety protocols, the Federal Aviation Administration (FAA) reduced Air Traffic Control Tower (ATCT) operating hours, which affected a comprehensive tally of overall activity. During the hours the FAA did not staff the tower, ORL staff provided the activity data. As a result, there is a variance between the official stats showing an overall decrease compared to 2019 and the unofficial count showing a nearly double-digit increase. The following is a summary of 2020 operational activity: 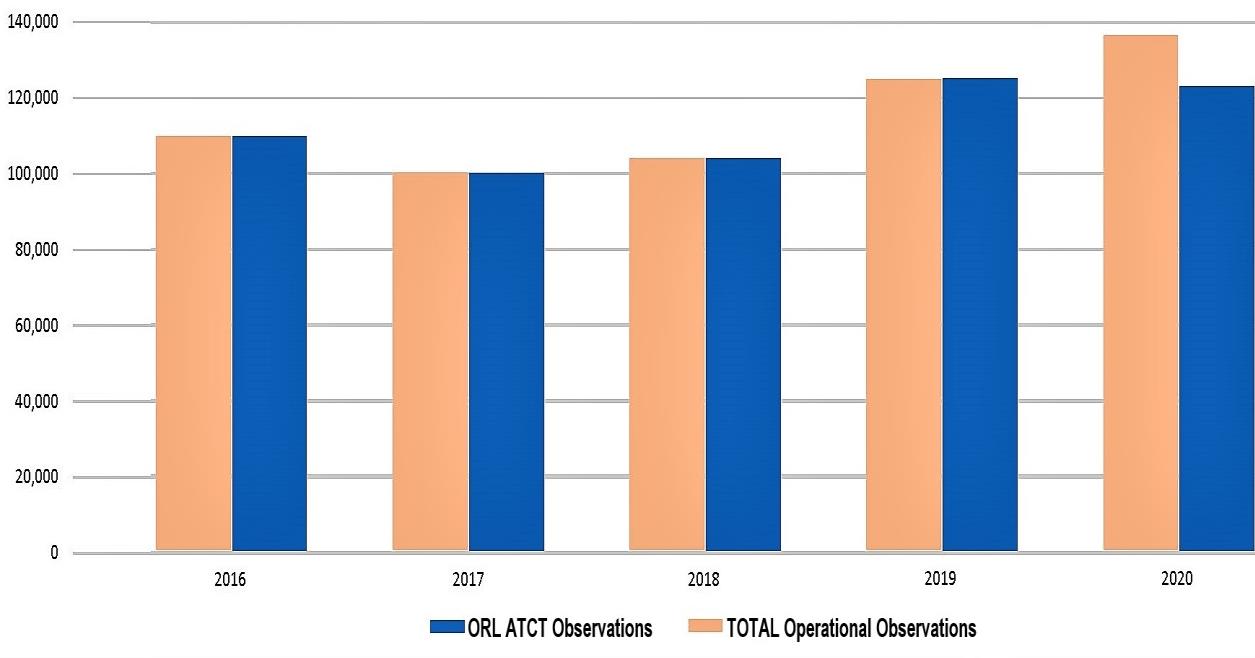 Accurate reporting of operations is important because it determines ORL’s classification as a regional or national general aviation airport, which affects eligibility for federal grants and other considerations.

Nationally, out of 530 public use airports with an FAA ATCT, ORL was the 99th busiest airport in the US. This includes commercial service and general aviation facilities.

The Greater Orlando Aviation Authority (GOAA) is currently in the process of exploring areas of potential development on ORL property. The Authority is in negotiations with firms to take over management of Colonial Promenade. The mall, located between the airport and Colonial Drive, has undergone substantial renovation in the past year and has 17 build-to-suit units available for lease. Revenues generated from this and other GOAA-owned properties in the area help fund ORL activities.

In addition, the Authority is looking to develop property in ORL’s southeast quadrant. The 12-acre parcel near the intersection of S.R. 408 and Andes Avenue offers a central location with access to major interstates. Under consideration is the construction of a warehouse distribution center that would service ground transportation of goods for transfer to area businesses.

When you click on the Pay Now button below, you will leave the website of the Greater Orlando Aviation Authority (the “Authority”) and will be redirected to the Online Payment Portal – PayPoint (“PayPoint”), which is operated and maintained by First Data Merchant Services (“First Data”). The Authority has no control over PayPoint and does not assume any responsibility, endorse or guarantee any aspect of your use of PayPoint.

Please note that the Authority’s Finance Department makes every effort to produce and publish the most current and accurate information possible. However, payments received via PayPoint are not processed until the next or following business day and will not be reflected until that time.

When you click on the CONTINUE button below you will leave the website of the Greater Orlando Aviation Authority (the “Authority”) and will be redirected to Viewpost.  The Authority has no control over Viewpost and does not assume any responsibility, endorse or guarantee any aspect of your use of Viewpost.